Home
Blog
What is a polyamorous relationship

We’ve enjoyed movies like the 1990s flick Threesome. It shows three people in a relationship with true feelings of romance. However, Hollywood and reality tv shows don’t do justice to these relationships, how they work, or how they meet the needs of all partners involved. There is a tendency to sensationalize the topic of polyamory, just like gay marriage, polygamy, and other non-traditional relationships. Such stereotypes about polyamorous relationships stem from a lack of understanding and education. When traditional folks get to know polyamorous folks, many of the myths are dispelled, and the ensuing greater understanding and tolerance for alternative lifestyles emerge. Which is quite a relief to everyone! If you are considering entering a polyamorous relationship, these are some insights into the lifestyle.

How Does Polygamy Dating Work? 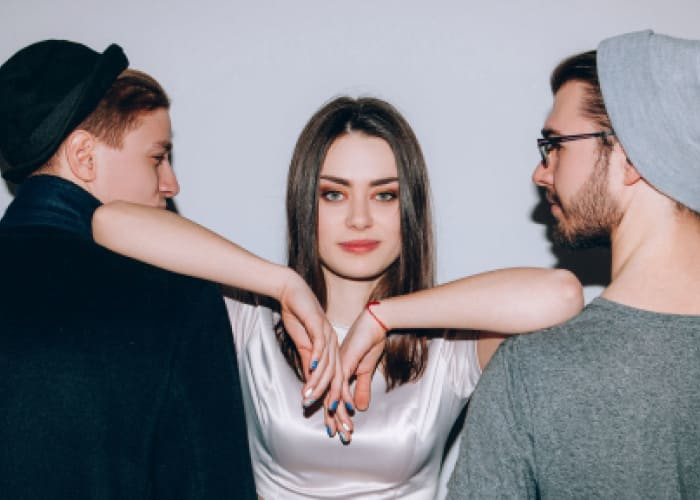 People in polyamorous connections don’t go out and start them by frequenting a dating website or by attending mixed gatherings. They sometimes fall into such arrangements when least expected or adapt their existing lifestyle to accommodate more than two. They might have a relationship and later discover feelings for a third person. To continue connecting with the first partner and enter a connection with a new lover, they use transparency and honesty. They tell their first mate about their connection to a new person without fear of judgment or reprisal.

In polyamorous life, everyone involved is aware of the potential for new relationships, but they might not meet all the partners. There is a general feeling of wanting each polyamorous partner to be happy and not limited by monogamous arrangements. Feelings of jealousy and resentment get addressed so ongoing relationships can continue. Surprisingly, some adults in a polygamy dating community are not sexual people, which means they have emotional or friendship ties. Still, they don’t practice sex with their partners. They might practice handholding, cuddling, kissing, or other physical touches but not have sex. Also, a polyamorous link might occur between two with an intense connection. Still, there is little or no contact in between their meetings. Besides, big-hearted people feel an intense connection often and don’t limit themselves to one partner. They love multiple people in their lifetime.

Polyamorous indicates the presence of at least two relationships. Get attached to two or more people lovingly with or without a sexual component. As you love each person, you value the freedom and consent in each relationship. The people you love feel like family. Cohabitation might be a factor too, but polyamorous partners can join a tribe or an extended network of open-minded people. Their family members and friends might be aware of their different relationships too. What’s more, polyamorous partners define their personal relationships, which might not fit our definition or another that’s offered online. Polyamorous relationships negotiate the behavior norms that work for them and each relationship they choose. Rules might change over time. Don’t confuse this with an open relationship where you tell someone you’re not exclusive to them emotionally or sexually.

What is a Polyamorous Relationship? Here Are the Types

A poly triad relationship can take two main forms. First, one person is dating two other people, but the three aren’t romantically involved. Second, the three people date each other, and everyone is emotionally linked. Three people might enjoy joint activities or keep their love private. When you’re dating two people, and they know of the existence of the other person, there’s the potential for jealousy and other issues, but you negotiate these problems along the way. They might not want to interact, which makes it parallel polyamory. Polyamorous partners might have a shared residence, mixed finances, children together, and/or marriage. However, such ties aren’t required. Some people are solo polyamorous because they choose not to form those ties. Some people will enter polyamorous situations and be single or in monogamous relationships at other times. You mustn’t limit yourself to one lifestyle. An alternative is serial monogamy, where people move from one relationship to the next but never commit to anyone for long because they fear true intimacy. 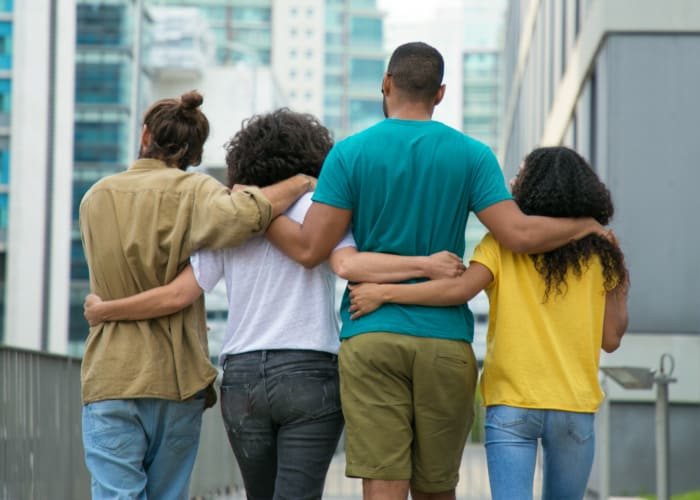 If you and all the partners you’re involved with are aware of these relationships, it might be fun to have gatherings around the kitchen table. Multiple partners can share a meal and fellowship. Everyone practices love tolerance, respect, and open communication. They can bring their kids and friends, etc., and offer support and resources to other remembers of their community. If this kind of tribal approach fits you, you build a social network. It is not that different from two ex-spouses bringing their new spouses to a holiday dinner with the children and grandchildren and the boyfriends/girlfriends of their kids. It takes time to build awareness of the poly lifestyle and allow such networks to grow. In some polyamorous life models that fit this idea, members don’t establish a hierarchy in their relationship and don’t form a basic polyamorous couple with an attachment, as everyone is equal, not just spouses or people living together. No one is defined as a secondary partner or feels left out of things.

Polyamorous romances do not imply you’re having sex freely whenever you choose. Life is not a big orgy, and you’re not playing the field. It means you’re choosing ethical non-monogamy (ENM) often because you prefer more than one romantic attachment. You might be in a polyamorous marriage, yet all members accept their loving partner might have sex with at least one other person. When two people are married, the husband or wife has a girlfriend or boyfriend, but that secondary relationship is considered more casual. There is a loving connection between husband and wife and the third person, but it’s not the primary relationship. However, no one is randomly hooking up with multiple partners. You feel a commitment to your partners, but you accept more than two altogether. You are not bound by monogamy or traditional heterosexual or homosexual norms. If you set the norms and everyone agrees, then the ethical component is there. 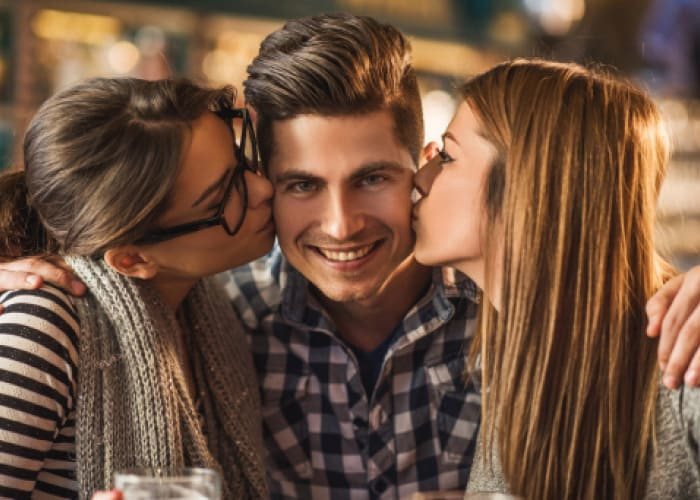 The more you read about polyamory, you might discover that, when it’s done right, it has the potential to meet more emotional needs of each person than a monogamous relationship or being single. You are loved by more than one person, and you give love to others. You don’t limit yourself to one person under a starvation model. If you fall in love again with polyamory, you mustn’t stop loving the first person. Everyone in a polyamorous relationship accepts your right to love people over your lifetime, but the living arrangements, kids, and marriages might change. Is it really different than being married at least twice? You give your heart to a person, and, as life changes, later you give your heart to a second person. The difference is that, in polyamorous couple, romances might be contemporaneous, which challenges the norms of traditional society, looking at polyamorous couples as something abhorrent. It is hard for people to open their minds to a world that is not defined as husband-wife, husband-husband, or wife-wife. With more love to give and receive, it makes sense that poly people can feel more emotionally secure and supported by their social connections.

In polyamory, you have more than one partner, and you freely live your life while keeping those connections. People have your back as long-term family members, and they play important roles from time to time. You get novel experiences, such as dating someone for a short time, and you don’t explain yourself to anyone. You control your sexuality and define each relationship as you move through life. It’s liberating to love freely and express yourself when appropriate. It’s comforting to have emotional connections with multiple polyamorous people if you’re not limited by monogamy.

In polyamorous life, communication is essential. Consider each person’s feelings and treat everyone with respect and love. Don’t do things that intentionally hurt one or more partners. For example, you are married to a boyfriend on the side. Don’t do things to create tension between your husband and boyfriend. As a good friend and lover, keep your promises and commitments to both. In turn, they mustn’t place too many demands on you to meet their needs because they want you to be happy. In ENM lifestyles, everyone wins if the boundaries are respected, and people are not too jealous or controlling of other people in the network.

Don’t confuse polyamorous life with the swinging lifestyle. In the second lifestyle, the recreational sex component is the big focus. For example, two polyamorous couples play together and even socialize, like traveling or going to a concert. However, in a poly quad, the husband-wife might start dating a person from another husband-wife pair. Everyone consents to the existence of more than one romantic relationship because they want their partner(s) to be happy. Everyone must be open-minded enough to allow such connections to strengthen over time. If you question existing norms, you might fall in love with polyamorous life, but prepare yourself to raise eyebrows and receive some comments!