Review for TapToDates.com, the Mobile Site for Serious Dating

In our increasingly technology-driven world, the realm of dating has to improve and change to keep up constantly. This means dating sites are forced to either change to fit the changing audience’s tastes and ways of communicating, or fall behind and be lost in the shadow of thousands of other dating sites. For TapToDates.com, the choice is clear. To attract a modern-day audience, a dating site must be like the audience, constantly mobile. Sites such as Tinder have also taken advantage of this evident nature within the population. People no longer sit on computers searching for matches. Everyone has a phone, and thus the time is for mobile apps to come to the forefront. TapToDates.com, like others, thus stress their mobile app and mobility in general.

TapToDates.com, like Tinder and other sites, serve the more mobile inclined of the population. This tends to be younger people, but more mature people can be part of the audience as well if they have given into the surge of mobile devices and the rise of the app market as a result. However, unlike sites like Tinder, TapToDates does not focus on casual relationships. TapToDates fills in the gap Tinder leaves behind, the gap of those who are mobile, but who are looking for more serious relationships. TapToDates serves this audience by squeezing a desktop dating site into the size of an app but loses none of the functionality for it. While the site does still operate a desktop version, it stresses its app, made for both Apple and Android markets. It can see that people are on the go more now than ever, even when looking for a relationship. The experience is thus as fast-paced as other mobile dating sites but focused on somehow getting two moving targets to connect and form lasting relationships. 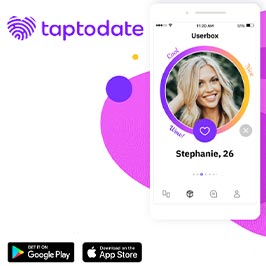 Registration is free
Signing up is fairly straightforward, like other average dating sites

Signing up for TapToDates.com is fairly similar if not identical to registering for other dating sites, being able to be done on both desktop and mobile versions. However, mobile is the clear favorite for this site. It asks basic information such as the gender of the user as well as the user’s gender preference. Then the user is asked for an email address, a password, and a username. The dating site recommends the username to be appropriate and professional to make matching and conversations as respectable as possible. After that, the user is asked for age and location to match them with others around better.

Once the registration process is complete, the user will be directed to create a profile. Given that the site is meant for long-term relationships, the profile will ask quite a few personal questions. This comes in the form of TapToDate questions that better focus on the matching algorithm. It is recommended to put as much detail into the profile as possible. After all, the site is generally not for casual users, but those willing to really get to know someone.

TapToDates.com is all about ease of use, hence why it has put so much effort into its mobile app over its desktop version. Given this, the site is fairly easy to use. The registration process is straightforward, the profile creation is simple, and searching profiles for matches is fairly easy too. Some of its special features are secured chats to share photos, chat rooms, “Super Likes” to boost dating chance, and a smart search filter to find local dates. Given that TapToDates.com is mainly focused on its mobile app, it operates as a site on the go. Matches are seamless, so there isn’t much to complicate the process and make it overly cumbersome. Consider the site Tinder Plus, the plus being for longer relationships than just one-time hookups. The name of the site shows off its ease of use. A simple tap is generally all that is needed to get the dating process started.

TapToDates.com has average search functions compared to other dating sites. The emphasis is placed on its mobile app, so searches often operate in a mobile environment. Members can look at each other’s profiles, search by location, or simply browse through profiles with attractive photos. The site has very basic search functions found on many other sites, using criteria from the questions asked during the profile creation. The only difference is the emphasis on long-term relationships. Members are free to message other members, search for chats, and “super like” a profile to show interest.

TapToDates.com has an average safety and security rating common to most dating sites. Accounts need to be verified by email before setting up a profile, and photos need to be submitted for moderation before being made public on profiles. All user information is encrypted using modern encryption programs used throughout other dating sites. Private chat rooms are by invite only and are also encrypted using an extra set of encryption programs to ensure total security of personal photos and private messages. Like other sites, TapToDates.com does not tolerate abuse of any kind. Abuse can be reported to customer service by email or phone. Also, members can be blocked should the user deem that they want to block a certain person who may be abusing them. TapToDates keeps its own safety page, which has guidelines on how to keep safe while operating its site and when dating in general. It is up to the user to exercise caution when chatting with strangers.

TapToDates.com follows suit in a long line of dating sites changing themselves for the modern day. The days of sitting at a desktop computer looking over potential dating matches are numbered and are replaced with days filled with people who never seem to stop. This constant need to get up and go has given rise to mobile apps to suit the needs of the dating world. TapToDates.com fills that need as a kind of Tinder Plus, going further than what Tinder does and focuses on long-term relationships over casual ones.

TapToDates.com, in all arguments, appears to be a legitimate business. It offers a service that many other dating sites offer and operates its business without the need for excessive complications. The site is fairly average for a dating site, though a bit more expensive given that it doesn’t offer anything new to the dating scene to justify the higher cost. It has messaging capabilities, and following the push into the modern mobile era, it has video and voice chats for premium members. Everything about the site is legitimate, and it serves in its role as a mobile dating site for serious dating.

How to cancel a subscription on TapToDates.com?

Given the evidence presented, the popularity of TapToDates.com, the fact that it has a working mobile app, advertises itself as a sort of Tinder extra in that it is dedicated to long-term relationships, the site appears to be legit. The site is a tad expensive, which raises alarms, but in the world of dating apps, money flows like water, regardless of if the site is legit or not. Every option offered on the site appears to function as advertised. Ratings generally focus on its high price in relation to what it offers, which is comparable to other legit dating sites.